What To Do with Your Retirement In A Market Correction


I have been getting a lot of requests to put up a blog post to prepare everyday retirees for an upcoming market correction.  First of all let’s describe or identify a market correction.  A market correction is essentially an overall market drop of about 10%.  A market correction is not to be confused with a bear market, which is about a 20% drop in the markets.  First, let’s discuss when the last official market correction was on the books.  The last correction was the summer of 2015, and it started with China’s market in June.  China had a stock market crash that continued into July and August, then around the middle or August the Dow Jones Index (a collection of key stocks that measure the market as a whole)  The Dow Jones Stock Index basically measure the pillars or historical fortune 500 giants of the United States fell about 10%.  The Dow Jones fell 588 points during a two-day period, 1,300 points from August 18–21. Then on Monday, August 24, the world stock markets were down substantially, wiping out all gains made in 2015.

I think while I have the opportunity I would like to tell you the difference in a bull market and a bear market.  A bull market is when the stock market is rising and a bear market is when the market is dropping.  Okay to help you remember, if a bull was charging you he would charge UP.  Nevertheless, if a bear was chasing you he would be chasing you DOWN the hill.  I know sounds strange, but when you have to pass a finance exam sometimes you have to come of with the strangest memory tools. That was close I almost became more technical than I wanted to in that last explanation.

Okay now what to do in your retirement account as we you see a couple of things on the horizon.  Let’s talk about why we may be due for at least a market correction.  The upcoming election may aid in what we call “Political Risk”, this is basically when there will be some adjustments good or bad, but due to an election expect a shift in the markets.  Also we are in an interest rising environment.  There has been two interest rate hikes this year, which is good and bad.   Good because this signals a strong economy and an unemployment rate of about 3.8%. Bad because the rate hikes affect things like home equity lines of credit, credit cards, etc.  The federal chairman’s job is to push the gas pedal if the economy moves to slow and let up off of the gas if it starts to move to fast.  Using this analogy the federal chairman is letting up on the gas.  This slows borrowing (because rates are to high) and reduces the money that consumers may have at their disposal.  Too many dollars chasing goods causes inflation.  Meaning if the grocery store now says a loaf of bread is $5.00 dollars, then you have no problem paying it because you essentially have it at your disposal to pay that price.

Now my disclaimer as a former stock broker and current advisor PAST PERFORMANCE of the AFOREMENTIONED STOCKS IS NO GUARANTEE OF FUTURE PERFORMANCE.  YOU COULD HAVE LOST ALL $10,000!

I only suggest staying put because saving for retirement is 100% different then day trading.  Retirement investing is and will always be long term investing and your chances of making money means you have to be in the market.  I have included Apple’s chart since the last correction just to give you a supporting visual.  If you liked what I shared and how I shared it, then I do have a Do It Yourself 401k (DIY) planning course coming up in the next few weeks.  If you would like to have access to my Teaching Site Pre launch and receive 50% off the entire course before I go live then click here to sign up.  If you are interested in the My Retirement Podcast series then click here to listen.  The Retirement Exit podcast show is also now syndicating on iTunes, iHeart Radio, Google Music, Spotify, and TuneIn Radio. 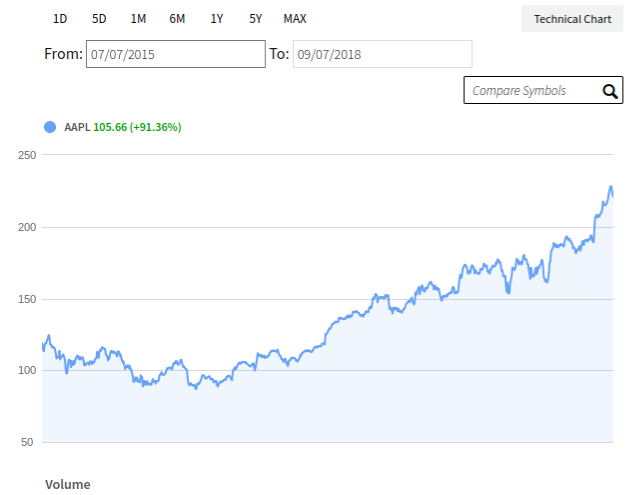 Popular posts from this blog

August 02, 2021
How much money do you actually need to retire? Some retirement calculators say it takes an estimated 1 million dollar retirement nest egg to bring in an average of $40,000 a year as a retirement income. But, in fact, just last month, through research from a science journal published by the  Max Planck Insititute for Demographics , the probability of living to 110 years has just increased significantly.  Nevertheless, what does that have to do with you, and how much do you actually need to retire? I will address my opening statement first. I have been helping people plan for retirement for over two decades, and I must admit that while most have saved for retirement, less than 15% have amassed a million-dollar retirement portfolio.  Does that mean that the existing 85% will live below the poverty line in retirement? I am unsure that this will be the case as some still have pensions, annuities, and untapped real estate wealth not primarily counted on for retirement that may help fill mont
Post a Comment
Read more

One Retirement Myth To Be Aware Of Today

December 02, 2019
I love talking retirement and rightfully so, as I have been working with clients and their portfolios for nearly 20 years. One thing that was hard for me to understand as a young life insurance agent was why I had to know everything about a client before I started writing their life policy. My manager would always tell me that you have to do confidential questionnaires. My thought as a young agent was why when they wanted insurance, and I want to sell it to them. This type of approach was a win-win for me trying to get a commission. As a veteran in the business for more than 35 years at the time, he said you young kids just do not get it. How do you go into a doctor and tell them your elbow hurt because you bruised it, and they give you some cream and send you on your way, only to discover that you have a fractured bone chip? Now that I am older and around the same age, he was when he started sharing his sage wisdom with me, I truly understand what he was talking about now that I am ol
Post a Comment
Read more

Fred came to us for his retirement wants and wishes. Could we pull it off?